Canada It is a country that has wonderful landscapes, especially if you like lake postcards with lakes, mountains, rivers and forests. A particularly beautiful landscape is High river.

High River is a community in the Alberta region, about 54 kilometers from the city of Calgary, and is very famous because here many TV series and movies have been filmed. That's right, in High River there is nature and filming.

It is named for the river that crosses through the city. The first European settlers arrived around the second half of the XNUMXth century, developing little by little hand in hand with the extension of the train, but it experienced real progress in times of the First World War. It was then that industries were established.

Fortunately, this development did not overshadow the beauty of its natural environment and the special atmosphere of "Small town" that he has never left her. You can see the Rockies on the horizon, and that, you barely drive half an hour from the nearest city.

In fact, today, from Cargary, tours are organized to this picturesque little town known as «Home of Heartland », precisely because it is the filming location of the most popular CBC series: Heartland.

Heartland is the series that has made High River popular. The series revolves around the life of a country family, their ups and downs in agricultural, family and heart tasks. It's one of the CBC shows The longest-running and filming is split between sets in Calgary with the ranch-studio at Heartland.

Heartland Tour in the High River

As we said before, High River is only half an hour from Calgary so either you hire a tour or you go on your own. The filming takes place from May to the beginning of December and when the TV people arrive, everything is transformed. The small storytelling community enters the television dynamic.

Heartland fans should start the Hudson tour for the Highwood Museum. The Visitor Information Center works inside this museum and everyone knows about filming so you can take advantage and chat with them about the series. Behind the museum are also parked trailers so if there is filming you will see some interesting activity.

Plus, the museum is quaint in itself because it operates within the old, historic Canadian Pacific Train Station. And it is interesting also because there is an exhibition that not only focuses on Heartland but also on other movies or series filmed in the area such as Fargo, The Revenant or Unforgiven.

In Heartland, visitors can also see much of the series' costumes and important objects in the story, such as a dollhouse from season 7. Also, for the most fanatical, there is a question and answer game that puts them to proof. And of course, there is a gift shop where you can buy baseball caps, newspapers, decorations for Christmas trees and more.

One block from the museum is Walkers Western Wear, where is it sold official merchandising of the series, such as sweatshirts, t-shirts or calendars. At Olive & Fincha, another store, they also sell things related to the series, including iPhone cases. This store is on 3rd Avenue and this very street always appears in television history, so one feels a bit part of it ...

On this street is also Maggie's Dinner, el Dinner of the series. Obviously, it is not for real, but you can always look out the glass and glimpse the set and its intricate operation. Next door is Bartiling and Sons Mercantile and also Hudson's Antique Mall. And just beyond the Van Born Travel Agency with its charming window, ideal for taking photos. Across the street are the Hudson Times offices and they deliver free newspapers.

One more block is 4th Avenue. Here it is Collosi's Coffeee, with its artisan manufacture of vanilla and caramel syrup. A delight, they say. Outside one of the external walls of the cafeteria is painted like a blackboard so one can leave their memory there. Next to the cafe is Evelyn's Memory Line, a quaint little bar that serves delicious ice cream and sandwiches with a very retro décor.

Afterwards, yes, it is time to go out for a walk through more streets. At some point our steps will lead us to George Lane Park, the site chosen by the local high school to hold their graduation ceremony, something that appears in the TV series as well. The park has a nice gazebo and a part that works as a camping area where you can pitch your tent from May 1 to September 30.

The street leading out of the park is 5th Avenue and at the end of it, directly opposite the historic Wales Theater, is the High River Motor Hotel. A small and very classic motel that appears both in the series we have been talking about and in the movie Fubar. For taking photos, it is valuable.

Although High River is heavily used in the entertainment industry, a large percentage of the filming is done on a ranch west of Millarville. It is a private place so you cannot access it, but Millarville, this other town, also has its history, and therefore its own locations, related to cinema and television. 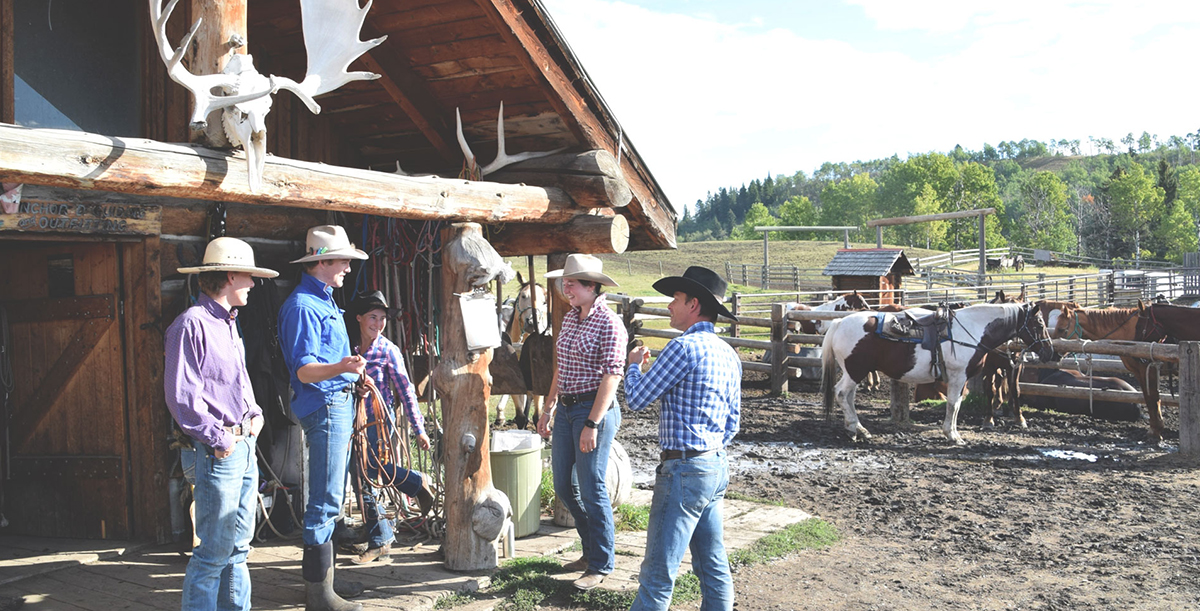 These rides are twice a day, every day, for adults and children ages six and up. The walks serve as an introduction to the cowgirl life but also to know the beautiful nature that surrounds the High River, Rockies included.

So if you go to Canada or if you follow this popular series online, keep in mind that you can make a great visit to this quaint Canadian town.