The Timanfaya National Park, located on the Canary Island of Lanzarote, is unique in our country for being eminently geological. This means that it was formed as a result of the volcanic eruptions that occurred on the island throughout the 1730th century, specifically in 1736 and 1824, although it was also completed with the one that occurred in XNUMX.

Because of them, it forms a landscape that it seems from another planet due to its sparse vegetation, its rough stones, the variety of colors that go from ocher to orange through red or black and its abrupt coastline dominated by volcanoes. But all this also gives it a unique beauty. If you want to know more about the Timanfaya National Park, we invite you to follow us.

A little history of the Timanfaya National Park

On September 1730, XNUMX, a terrible volcanic eruption was unleashed in Lanzarote that forever changed the morphology of the island. If we are to believe the priest Lorenzo Curbelo, witness of the phenomenon, "Around ten o'clock at night, the earth opened two leagues from Yaiza and a gigantic mountain rose from the bowels of the earth".

The fact is that nine towns disappeared forever and the lava continued to spread over six years to cover a quarter of the island and fill its meadows with volcanic ash.

Already in 1824 a new eruption took place that gave rise to the volcanoes of Tinguatón, of fire y Tao while triggering a terrible famine in Lanzarote for leaving uncultivable lands.

In 1974 the Timanfaya National Park, which occupies almost fifty-two square kilometers in the southwestern part of the island. It is one of the most visited in Spain together with National Park of the Picos de Europa, the one of Sierra de Guadarrama and that of Teide, on the Canarian island of Tenerife.

What to see and do in the Timanfaya National Park

This Lanzarote park has more than twenty-five volcanoes, some of which are still active. In fact, there are places in the area that reach one hundred and twenty degrees Celsius on the surface and up to six hundred at about fifteen meters deep. But, without further ado, we are going to show you the best to see in the Timanfaya National Park.

It is in White stain and we advise you to enter it before starting your visit to the park. Because they will offer you an entire audiovisual program about the reality of this area. And you will be able to observe the impressive geysers, which expel boiling water from the bowels of the earth, as well as other demonstrations. For example, how vegetation burns just by introducing it a few centimeters into the ground. Entrance to this center is free.

You will arrive at the park through the Taro de Entrada, where you pay the cost of the visit that includes parking and, most importantly, the bus tour (in bus for setting us with Canarian words) by the Route of the Volcanoes. Part of the call Hilario Islet and it passes through places of ashes or covered by white lichens. They are two of the thousand variations of the landscape that you will see on this route. But perhaps more important are the fourteen volcanoes that it runs, from the Timanfaya boilers until Valley of Tranquility going through the Mountains of Fire or the Little Heart Caldera. 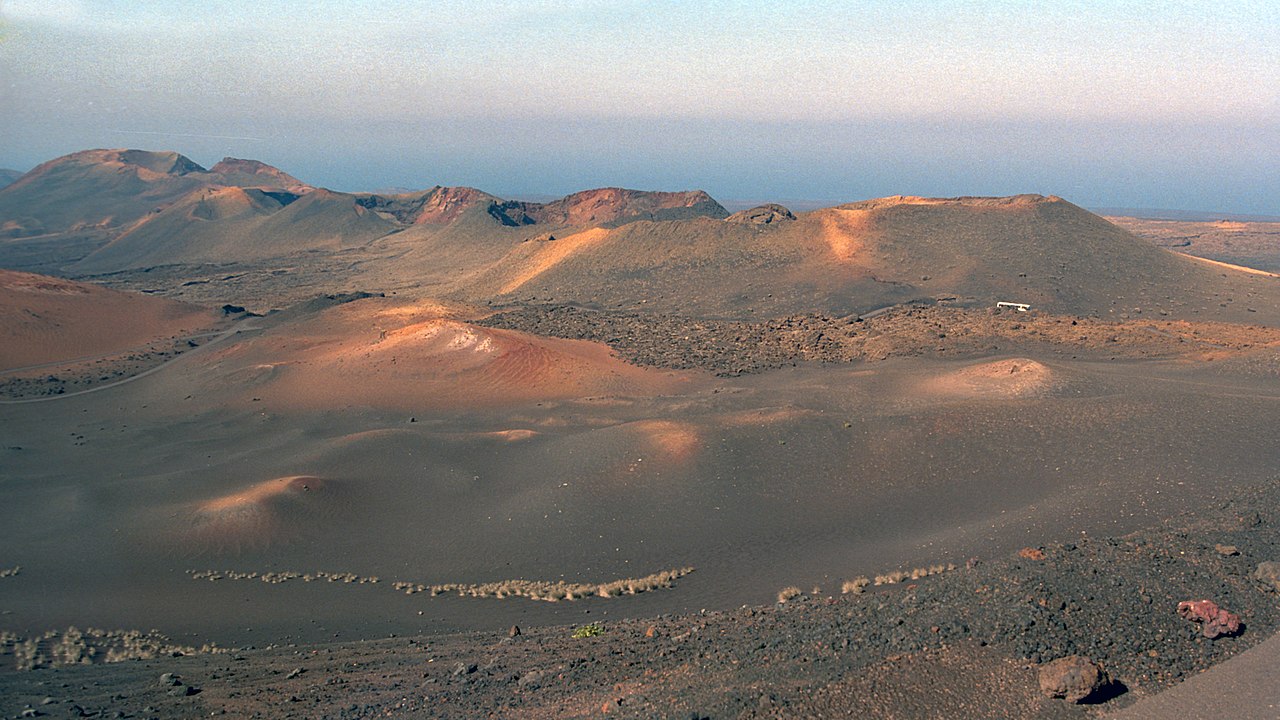 The camel stall, the most typical of the Timanfaya National Park

Without a doubt, the most popular activity in the park is the short walk on the back of a camel by the southern slope of the Timanfaya. It is not cheap but it is a different experience from which you can leave testimony because there is a photographer who immortalizes the image. Also, in this area you can see a small ethnographic museum about life in the park.

To do this tour you have to book it in advance. Some cars will take you from the Visitor Center to the start of the journey. This is done on foot, although it is only three kilometers long. Throughout the tour you will see a combination of traditional agriculture and volcanoes such as the Hernandez mountains y EnchantedAs well as lava lake about the first and the jameos or volcanic tube openings caused by the collapse of its roof.

We write it in the plural because there are two, one shorter and the other longer, but both are done on foot. The first, of only two kilometers, will take you from the town of The gulf to Paso beach touring the impressive coastal cliffs that emerged after the eruptions of the eighteenth and nineteenth centuries and observing the islets that formed the lava.

For its part, the longest route is nine kilometers long and you can hire a guide. In fact, we advise you to do it because it is rough and difficult terrain. You can also see impressive cliffs and islets covered with lava that contrasts with the vegetation of its highest parts. The coastline that extends convexly from The Janubio until Caleton of the Souls. If you want to do this route, don't forget to bring comfortable clothes and shoes, something to eat and water.

What is the best time to visit the park

Lanzarote presents a subtropical climate, with warm temperatures all year round. In winter, they rarely drop below fifteen degrees, while in summer they easily exceed forty. It is also a Dry weather with an average rainfall of just two hundred millimeters per year. However, the Timanfaya National Park, which is located to the southwest of the island, has temperatures a little lower and therefore more pleasant.

Consequently, any time of the year is good for you to visit the area. However, in summer there can be many tourists and quite hot. Therefore, our advice is that you go in spring or fall to be calmer and better enjoy this imposing scenery.

How to get to Timanfaya National Park

The island of Lanzarote has only one airport, the César Manrique, so named in honor of the great local artist who created the impressive Jameos del Agua , another wonder of the island. Both national and international flights arrive at the aerodrome and it is very close to both the capital, Reef, as well as the tourist towns of Puerto del Carmen y Costa Teguise.

Once you are in Lanzarote, you will not have public transport to get to the Timanfaya National Park. The two ways to do this are to hire a organized excursion (there are many on the island) or rent a vehicle.
If you choose this last option, you must take the LZ-2 road and then turn onto the LZ-67, which takes you directly to the Interpretation Center. On the other hand, the LZ-30 and LZ-46 roads, linked by the LZ-56 and LZ-58, also run through the park. Another option is to take a taxi, but it will be much more expensive.

The Timanfaya National Park does not have any hotel establishment. Therefore, it is best that you stay in one of the aforementioned tourist locations or in the capital itself.

However, if you prefer, you can also stay in the small village of Yaiza, which is at the entrance of the park and has several hotels. If you choose this alternative, we recommend that you visit the Los Ajaches Natural Monument, an impressive volcanic formation with more than eleven million years old and located between Punta del Papagayo and Playa Quemada.

Where to eat: some typical dishes

However, the park has a restaurant. Whether you decide to eat in it or if you choose to do it in any other place on the island, we recommend that you try dishes as popular as the Crumbled potatoes with mojo, but also others less known outside Lanzarote.

Thus, the sancocho, a soup of tubers, vegetables and meat; the tollos in sauce, which are made with pieces of dogfish dried in the sun; the jams, similar to the previous ones, and the canarian stew, an island version of Madrid stew, only it also has beans and pineapple, a herbaceous plant similar to corn.

All this without forgetting the ancestral gofio, precisely millet flour prepared with water and salt, as well as the fish. As for desserts, you can try the bienmesabe, which is prepared with honey, egg yolks, ground almonds and sugar and served with cat's tongues, or the frangollo, a dessert of milk, flour, lemon, almonds, sugar, cinnamon and raisins. Finally, to drink, you can have a wine from Lanzarote, which has its own designation of origin.

Finally, we remind you that the Park conforms a very fragile ecosystem and for that reason it demands very rigid norms to the visitor. Among them, the following is prohibited: destroying or taking volcanic rocks, circulating or parking outside the places designated for this purpose, leaving any type of waste or any type of collection of the plants that make up the landscape.

In conclusion, the Timanfaya National Park is a unique place in Spain for its volcanic conformation. But, above all, because when you visit it, you seem to have moved to another planet. All its geological curiosities such as geysers will be explained to you in its Interpretation Center and then you can visit places like Mountains of Fire, The Calderas Blanca and Corazoncillo or Hernández and Encantada mountains. If you still do not know Timanfaya, be sure to visit it. You will be pleasantly surprised.