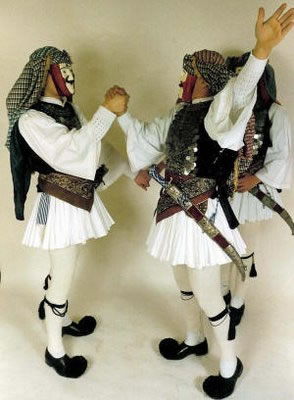 The beginning of dance in greece It is unclear, it is known that dance has played an important role in the life of the Greeks throughout history.

In the old communities greek the dances They were highly admired, indeed in his writings Plato expressed his belief in the virtue of dances by expressing that a man who did not dance was inelegant and uneducated.

At the celebrations in honor of Demeter, Era and Artemis and at the Panathenean festivals where Athena was honored, maidens danced with a long tunic down to the feet.

One of the most prestigious cities of Classical Greece came to Delphi dancers who came from the most remote regions, since in ancient times the dance it was an important part of religion.

As a case of the mythological origin of some dances there is the story of Theseo who killed the minotaur in the labyrinth of Knossos.

When he returned to Athens, Theseus stopped in Delos to make a sacrifice to the gods for having saved him, while the sacrifice lasted he invented a kind of dance that imitated the movements of snakes which represented the rugged path that he had had to travel in the labyrinth in his fight with the minotaur.

The word the dance of the labyrinth or Geranos as it was called in ancient texts, today it is danced in many regions of Greece

Nowadays, traditional dances are handed down from generation to generation as people delight in them in any type of celebration.

Some of these dances are considered Panhellenic, which means that they are from all over Greece such as the Kalamatianós and the Tsámikos.

However, each region has preserved its own dances where not all of them are so popular so they run the risk of being forgotten by the growing diffusion of dances from other larger regions.

It is the elderly people who care that these dances are not lost by teaching the young.

Despite the fact that the dances are born in different regions, they have a lot of similarity between them, such as the way of holding hands, the right posture, the formation of the dances and the elements they use.

The circle cannot be absent in any of them closed or open by making a chain or interlacing the arms holding hands or shoulders.

The one who leads the line is the creator of the steps as if he were dancing, he only adorns it in his own way and gives it such a wonderful touch that it transforms it into a colorful dance.

Every person who gets up to dance at that moment is KING regardless of their social class or economic situation.