Brazil It happens to be the greenest country in South America, a land of enormous natural spaces and incredible biodiversity. However, this immense wealth is seriously threatened, especially the brazilian flora.

A study carried out some years in the South American country estimated the number of threatened plant species at 2.118. Not only that: also, according to the prestigious Brazilian biologist Gustavo Martinelli, coordinator of Red Book of the Flora of Brazil (2013), the extinction rate of species is much faster than was thought just a few years ago.

Martinelli has been carrying out a titanic job of cataloging and classifying the vegetal wealth of Brazil. Their efforts are also directed towards raising awareness in society and the authorities about the importance of the conversation about this treasure.

Many species of the Brazilian flora are included in the Red List of the International Union for Conservation of Nature (IUCN). However, in light of new research, the actual list is much more extensive.

Experts estimate that in the Brazilian jungles they are still hiding many undiscovered species. These species could be between 10% and 20% of the real Brazilian flora. Interestingly, the rate of identification of new species is much slower than the rate of disappearance of known species.

The reasons for this mass extinction are well known. They can be summarized in three:

The threatened species of the Brazilian flora are classified as four groups according to threat level. This classification has been made based on the criteria of rate of decline, population size, area of ​​geographical distribution and degree of population fragmentation.

This is a brief list of the most emblematic species threatened by extinction:

Also known by other names like campinchorao, aveia do closed o indian samambaia. It is a plant with a very bamboo-like appearance that traditionally grew in the coastal regions of Brazil. Today he is in serious danger.

Endemic tree of the Brazilian flora whose wood is highly valued. Indiscriminate logging reduced the number of specimens to almost the extent.

Shrubby plant that produces berries with many beneficial properties for health. This plant, which belongs to the same family as mulberry trees, is in serious danger of disappearance in Brazil.

The paininha with its bright red and yellow flowers. An endangered species.

Plant with beautiful red and yellow flowers whose presence in coastal regions has been drastically reduced in recent years.

Subspecies of dwarf palm with a thin trunk that grows in some parts of the south of the country. The great palm groves of yesteryear are limited today to a testimonial presence. 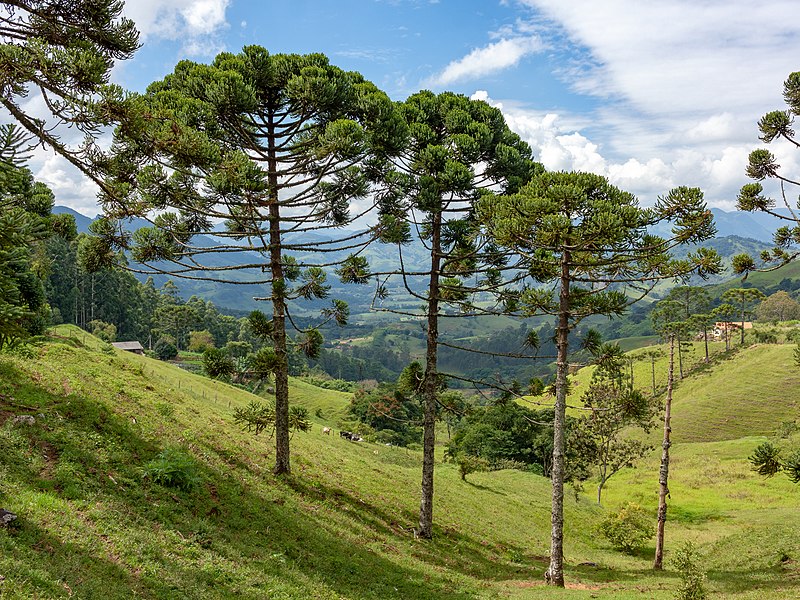 Pinheriro do Paraná or Araucária: the "Brazilian" pine in danger of disappearing.

Tree species of the family of the Auraucariaceae listed as vulnerable flora. This Brazilian pine, also called curi, it can reach 35 meters in height. Originally it extended in the form of great wooded masses to the south of the country. Its setback in recent decades has been dramatic.

Tree from the Amazon region whose red sap, similar to blood, is used to make many health and beauty products.

The famous "black thread" plant, once very abundant, has practically disappeared in the country.

Plant with pink flowers whose main distinctive feature is its stem and "hairy" leaves. A century ago it was distributed throughout almost the entire country, today it only survives in certain protected areas.

Save the Brazilian flora

It is fair to say that important initiatives are being carried out aimed at preserving the Brazilian flora. Brazil is a signatory of the Convention on Biological Diversity and the Aichi Targets (2011), an ambitious international commitment to prevent the extinction of threatened species.

Among many other measures, the federal government published a few years ago a priority areas map, many of which have already received a special protection status. And not only to save the flora, but also the fauna of the country.

In all of these conservation projects, the technology plays an important role. Thanks to it, it is possible to conserve seeds of threatened plants for future use in recovered habitats.