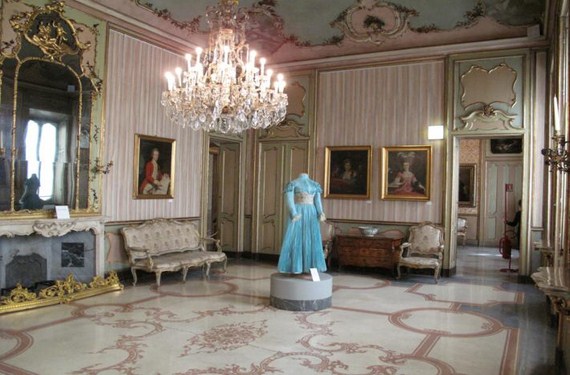 We visited today the Milan Fashion Museum, located in the Morando Palace, an elegant XNUMXth century building. Here you can see today the different textile collections of clothing and accessories that were stored for a time in the Sforzesco Castle. It also houses several temporary photography and design exhibitions.

The palace is in itself a true marvel. On the first floor of the palace is the art gallery, a collection of paintings, sculptures and engravings that the City Council acquired in 1934 thanks to the collection of Louis beretta. This gallery shows the urban and social evolution of Milan between the second half of the XNUMXth century and the first half of the XNUMXth century. In the rooms adjacent to the gallery we can see the good taste of the furniture and other objects of great interest, almost all of them from the XNUMXth century. The Beretta collection was moved to the Morando Palace after the Second World War.

The pieces that are exhibited in the Morando Palace are characterized by their great variety of different chronological and thematic references. In January 2010, a new exhibition was created in this palace to give greater visibility to the extraordinary artistic heritage of the Milan museum, especially, and in this case, within the textile section. Collections of dresses and accessories appeared as well as uniforms that were kept in the Sforzesco Castle without being exposed to the public. One idea that had already been brewing since 1995.

If you want to take a guided tour, you can get in touch at c.palazzomorando@comune.milano.it

To get to the museum, you can take metro lines 1 (with a stop in San Babila) or 3 (stop in Montenapoleone). Trams 1 and 2 and bus number 94 also reach here.