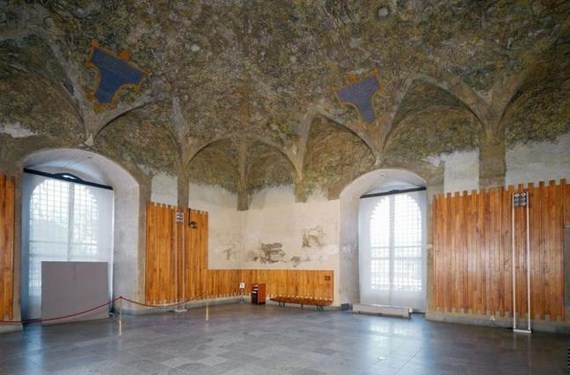 Leonardo da Vinci, born in Florence on April 24, 1452, arrived in Milan in 1482 at the age of 30 in search of a more open and pragmatic city. Soon he would place himself at the command of Ludovico sforza, patron and duke of the Lombard capital. He was just working on his famous painting of The Last Supper when he was commissioned to decorate the walls of the great room located under the northeast tower of the Sforzesco Castle, on the occasion of the marriage between Gian Galeazzo Sforza, sixth Duke of Milan and his first cousin Isabel de Aragón, princess of Naples.

This room, known at that time as the Camara dei Moroni, today bears the name of Sala delle Asse. The decoration, the only one by Leonardo that has survived to this day, consists of a pergola with leaves and flowering branches of 16 trees that intermingle with each other, symbolizing the union of the two contracting parties. At the top you can see the sky, surrounded with a gold ribbon, around the coat of arms of the Sforza. A letter from Chancellor Gualtiero Bescapé to Duke Ludovico, dated September 1498, points out the exact moment when Leonardo finished the decoration work in this room.

The decoration covers the north wall of the room. From a historical point of view, it should be noted that this room was the one used by the court of Ludovico Sforza to celebrate the great festivities, meetings and dances of the time.

The only problem today is that the various restorations have significantly altered the original beauty of the painting. The painting, covered by other plasters, was rediscovered in 1893, being restored in depth some ten years later, although the final one was not made until 1954.